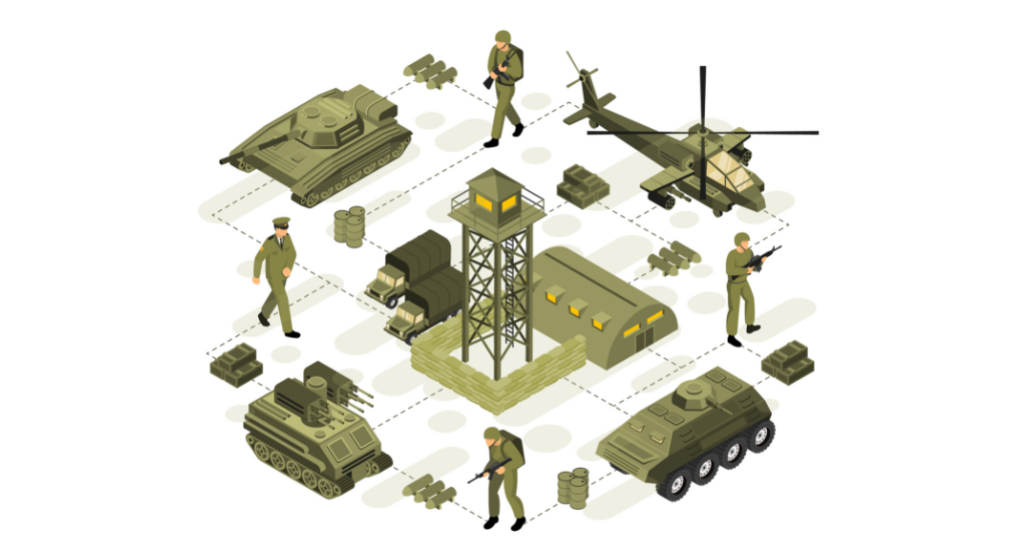 The government increased defence spending in the most recent Budget 2022 from Rs. 4.78 lakh crore to Rs. 5.25 lakh crore, despite the epidemic having an effect on the Indian economy. India needs to stay up with other nations’ ongoing technological updates to their military systems, therefore this is a strategic step.

India recently declared that 68% of defence-related commodities would be reserved for Indian industries in its Budget 2022. This means that only 32% of projects would be outsourced. Indian defence firms will be able to obtain more contracts as a result, increasing their earnings.

All of this will increase the value of defence stocks to higher levels, which will in turn result in larger profits for investors. Read the article completely to know about all listed defence stocks in India.

It serves as the foundation of India’s missile arsenal (which is one of the strongest competitive advantages of the Indian Armed Forces). Bharat Dynamics manufactures a variety of missiles, including Surface-to-Air Missiles (SAM), Anti-Tank Guided Missiles (ATGM), Countermeasures Dispensing Systems (CMDS), Torpedo Advanced Lightweight (TAL), and others, for the Army, Navy, and Air Force.

The foundation of the Indian air force is Hindustan Aeronautics Ltd. It creates cutting-edge technologies, including lightweight helicopters, fighter planes & drones. In addition to manufacturing, it can fix these machines. As a result, it is the only business in India that focuses on both manufacturing and repairing equipment. The business was listed as the 45th best defence company in the world. Like BEL, Hindustan Aeronautics is a debt-free company.

In 1954, Bharat Electronics Limited (BEL) was established in partnership with France. It was founded to supply the electronic equipment requirements of the Indian Defense Services. BEL is an aerospace and defence company owned by the government. It specialises in manufacturing cutting-edge electronics for use in both grounds- and space-based applications.

BEL devotes 7.5% of its overall revenue to R&D. The corporation is now the Defense Public Sector Undertaking (PSU) sector’s top R&D spender as a result.

In 2022, MTAR Technologies will debut as a new stock on the Indian stock exchange. The business was established in 1970. About 29% of the company’s total revenue has come from the nuclear segment since it was founded, 21% from the space and defence sector, and 50% from the renewable energy sector. The company manufactures a variety of machine tools, assemblies, subassemblies, and replacement parts for engineering, energy, nuclear, aerospace, defence, and other sectors.

Cochin Shipyard is a market leader in the construction and upkeep of all types of shipping vessels, including tankers, product carriers, bulk carriers, passenger cars, and warships.

Mumbai, Kochi, Kolkata, Andaman Nicobar, and Maple all have repair facilities for the company. To enhance its share of the repair market, it is expanding its Kochi facility.

The company concentrates on inland and coastal shipping, the fishing industry, and the cruise and ferry market, in addition to defence shipbuilding, to diversify its product line across several industries.

There are a number of factors that led to this surge in defence spending, with geopolitical factors including the standoff with China in Ladakh and the sight of Russian weaponry performing poorly in Ukraine.

It is therefore not surprising that the Indian government has emphasised “Make in India” in the production of defence.

The military ministry just announced the sixth positive indigenization list, which consists of 780 products and would reduce defence imports. In order to gradually increase their capacity for producing defence goods, Indian businesses (both public and private) are also investing more and more in defence technologies (such as drones, armoured vehicles, and rockets).

In this situation, investing in defence stocks may prove to be quite profitable.

Whether there is or is not a war, as the Indian economy expands, defence spending and orders for defence-related goods and services will undoubtedly rise in India and elsewhere in the coming years.

Due to rising defence spending and geopolitical unrest (such as that in Armenia), Indian defence firms are certain to receive both domestic government orders and exports.

The best defence stocks have actually performed remarkably well since the start of the war in Ukraine, as we shall see in a moment.